What is supracondylar humerus fracture?

A Non-dominant side(left) is most commonly affected as compared to the Dominant side (Right side). 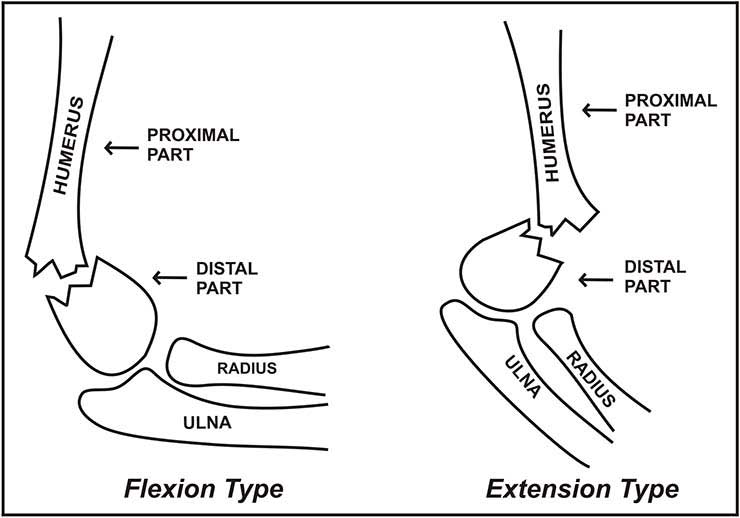 What is the Gartland Classification of supracondylar humerus fracture?

Type IV  fractures – Have no periosteal hinge intact (complete periosteal disruption). And also they are very unstable both in flexion type as well as in extension type i.e., they’ve multidirectional instability.

The most common mechanism of injury is an Extension type and it occurs due to falling on an outstretched hand. And as the hand strikes the ground, the elbow is forced into hyperextension. The olecranon functions as a fulcrum which focuses the strain on the distal humerus (supracondylar region), predisposing the distal humerus to break.

The supracondylar area undergoes remodeling in age 6 to 7, which makes this region thin and susceptible to fractures. Many important nerves and artery like (Median nerve, Radial nerve, Ulnar nerve, Brachial artery) lie in the supracondylar region. And if in case any of them got injured it can give rise to major complications.

Meanwhile, the flexion-type of supracondylar humerus fracture is not much common. It happens by falling over the tip of the elbow or falling with the arm twisted behind the trunk.

Clinical trials like the temperature of the limb extremities (cold or warm), oxygen saturation on the pulse oximeter of the affected limb, capillary refilling time, the presence of the radial and ulnar pulses, and also some other wounds that would signal open fracture.

Doppler ultrasonography should be performed in case of vascular injury if distal or radial pulses are not palpable.

When a neurological involvement is mentioned, it warrants a very careful examination and documentation for example when it first became evident, the degree of involvement and desirable progression/regression of symptoms. 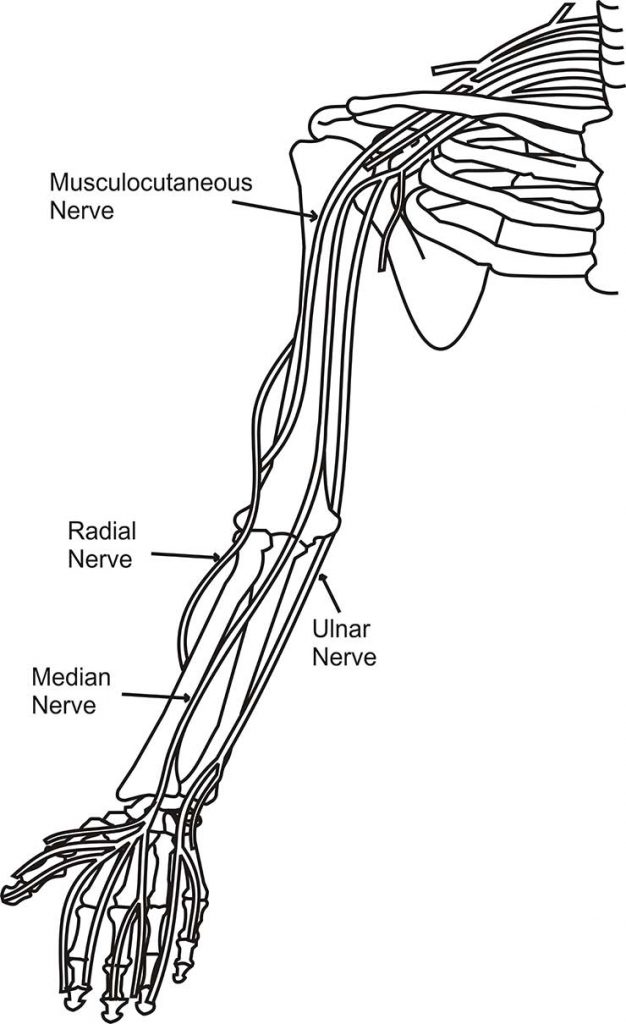 As in the diagram, you can see that the Radial and Median nerve passes anteriorly ie upper to the supracondylar region. While Ulnar nerve passes posteriorly to the medial epicondyle of the humerus.

The Anterior Interosseous Nerve Branch (AION) of the median nerve

is most commonly injured from the postero-lateral displacement of the distal humerus since the proximal fragment is displaced anterio-medially. As you can see in the upper diagram that the median nerve passes anteriorly and medially to the supracondylar region. So when the proximal fragment is displaced anterio-medially the median nerve is most commonly get affected.

This can be evidenced by weakness in the hands with a weak “OK” sign on physical examination (unable to perform an “OK” sign; instead the patient may perform a pincer grip).

Injury to the Brachial Artery –

It is generally seen that 6 to 20 percent of the supracondylar fractures reported the absence of a radial pulse. This is because the brachial artery is frequently injured in Type II and Type III Gartland fractures especially when the distal fragment is displaced postero-laterally (proximal fragment displaced antero-medially).

A puckered, dimple, or ecchymosis of skin only anterior to the distal humerus is an indication of difficult reduction. Because the proximal fragment may have penetrated the brachialis muscle and maybe the subcutaneous layer too.

The diagnosis is confirmed by x-ray imaging. Generally, Anterior-posterior(AP) and lateral view of the distal humerus (not elbow) are obtained. If there is any pain, injury, deformity, or tenderness in the forearm or wrist. Then separate films of these areas should be ordered.

Radiographs should be obtained just after proper analgesia and splinting of their extremity. Ideally, splintage should be used to immobilize the elbow at 20 to 30 degrees flexion to prevent any neurovascular injury (injury of the blood vessels and nerves) while still performing X-rays.

Splinting of the fracture site with full flexion or extension of the elbow Isn’t recommended as it may stretch the blood vessels and nerves over the fracture site or may lead to the impingement of these structures between fractured fragments.

This view helps us to check out the direction of displacement, the presence of valgus and varus alignment. In this view, you can also assess the Baumann’s angle.

Baumann’s angle is an angle between a line drawn parallel to the longitudinal axis of the humeral shaft and a line drawn along the lateral epicondyle of the humerus. The normal angle should lie between 70-75 degrees.

However, because of the significant difference between people, Baumann’s angle is
much better evaluated compared to the contralateral side. And also a difference of more than over 5° between both sides is deemed abnormal. 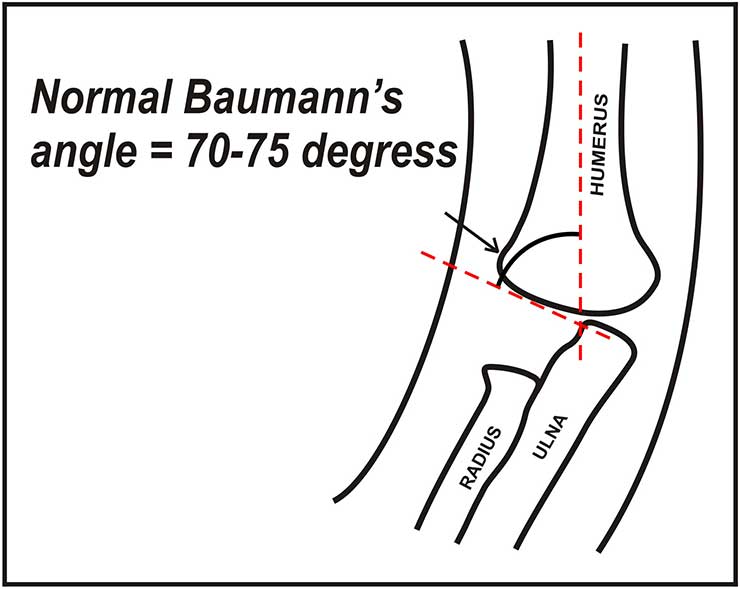 A non-displaced fracture can be hard to recognize and also a fracture line may not be observable on the X-rays. On the other hand, the existence of a joint effusion is beneficial in identifying a non-displaced fracture. Bleeding from the fracture expands the joint capsule and can be visualized on the lateral view as a darker place anteriorly and posteriorly, and is referred to as the fat pad sign.

Undisplaced or minimally displaced fractures are generally treated by immobilization in an above-elbow plaster slab, with the elbow in 90 degrees flexion for 3 weeks. Orthopedic casting and extremes of flexion should be avoided to prevent vascular compromise and compartment syndrome. The plaster slab (backslab) should extend as high above the elbow (close to the axilla) and down to the MCP joints.

In the case of Displaced fractures –

It is necessary to get basic knowledge and answers to all the questions because type II, III, IV fractures come in a category of displaced fractures and are generally reduced by closed and open reduction along with percutaneous K wire fixation.

In all the displaced fractures, the patient should be immediately admitted to the hospital within 24 hours after the injury because serious complications can occur within the first 48 hours. The following methods of treatment are used in the case of displaced fractures.

What are closed reduction and percutaneous K-wire fixation-

The close reduction is a process to set (reduce) a broken bone without opening the fracture site surgically. The broken bone is set back into its normal position, allowing it to grow back together. It functions best when it’s performed as soon as possible following the bone fractures.

Case A – After 7 days when the X-ray is performed again, the reduction was maintained.

Case B – After 7 days when the X-ray is performed again, The reduction got slipped. So to fix it your surgeon will go for the open reduction along with percutaneous pinning.

So to avoid slipping, and neurovascular complications, the best way to fix these kinds of fractures is by inserting one or two K-wires (percutaneous pinning) over the medial or lateral side of the elbow under X-ray image intensifier guidance.

When percutaneous pinning is performed?

When open reduction and K-wire fixation(percutaneous pinning) is performed?

In such cases, open reduction and K-wire fixation are necessary. This is also used as the first line of treatment in some open fractures and those requiring exploration of the brachial artery for the suspected injury.

Performing a closed reduction requires experience and it is performed by applying traction along the long axis of the humerus with the elbow in slight flexion.

Gartland type III fractures are more prone to neurovascular injury. As explained above the closed reduction and percutaneous pinning is the most favored/preferred treatment for the gartland type III displaced fractures. Therefore, management with closed or open reduction with percutaneous pinning within 24 hours has low complication rates when compared to management with closed reduction and casting as they have a higher incidence of residual deformity.

Gartland type IV fractures come in the category of highly displaced fractures. They are either stabilized by open or closed reduction with percutaneous pinning.

There are generally 3 types of serious complications that occur after supracondylar fracture of the humerus.

Isolated neurological deficits can reach up to 49% in type III Gartland fractures. Nerve injuries can occur either primarily immediately after trauma or secondarily after treatment. Here let me explain you this by taking 3 cases.

Nerve injuries occuring after trauma – It is recommended to immediately perform CMR (close manipulative reduction) in any case of supracondylar humeral fractures before transferring the patient to the operation room. As by performing CMR, it releases tension on the nerves.

Case 1 – Neuropraxia (temporary neurological deficits due to blockage of the nerves)- In case after performing close reduction along with percutaneous pinning. The fracture got reduced back into there postions as well as the nerves also. Now in case of neurapraxic nerve injuries most of the surgeons chooses ‘wait and see’ method for the nerve recovery. They wait for next 3 to 5 months. And if there comes no sign of recovery then the surgeons will plan for the second surgery (surgical exploration the nerve).

Case 2 – And in case if the fracture got failed to reduce by close manipulative reduction and open reduction is performed. Then it will be a good opportunity for the surgeons to open and explore the fracture as well as the nerve and also to correct both of them.

It is very important to remember that if in case the supracondylar fractures are reduced by open or close reduction along with percutaneous pinning. The surgeons should insert the K wires (percutaneous pinning) very carefully. As it is seen in many cases if the K wires either medial or lateral or both are not inserted properly then they can cause impingement on the nerves.

As in many cases it is seen that due to improper insertion of the K wires (percutaneous pinning) can cause impingement on the nerves. In these cases, the patient will complain of pain and neurological deficits after the treatment done with K wire. Then doctors will perform the surgical exploration of the nerve and remove the K wire that was impinging on the nerve. And insert a new wire at a safe distance from the nerve.

This is the most common complication in the Supracondylar humerus fracture which is known as Malunion. Because post-fracture the distal humerus grows slowly, therefore there is a very high rate of malunion. Malunion may occur either due to

Swelling and vascular injury (injury to the brachail artery) following supracondylar fracture can lead to the development of comartment syndrome.  So continued serial examination should be done which includes evaluation of the patients pain level, Pain, Distress/agitation response to the medication and splinting.

All these finding should be noted beacause they can be due to the muscle ischemia (descreased blood supply to the nerves and the muscle). As indication to all the findings can lead to the development of compartment syndrome.

In case if the compartment syndrome is not identified or got missed. Then it can lead to the development of Volkmann’s ischaemic contracture.

In this what happens is that the ischemic muscles ie (muscles that are getting diminished blood supply) are gradually replaced by fibrous tissue. Which in turn contracts and draws the wrist and fingers into flexion, fixed flexion of the elbow, pronation of the forearm. Therefore, early surgical reduction is indicated for the prevention of these types of complications. Distress/agitation response to the medication and splinting.

Stage of osteoarthritis of the knee