What is the Standing Flexion test?

The sacroiliac joint forms between the ilium and the sacrum bone, joined by many strong ligaments. It is a type of synovial joint. There are two sacroiliac joints in the human body, one on the left side and the other on the right side. They often match each other but vary from person to person. In the sacroiliac, joint two types of movement occur known as nutation and counternutation.

The purpose of the standing flexion test is to assess the sacroiliac joint dysfunction, mainly the hypomobility (reduced mobility) in the sacroiliac joint. This condition may result from many different causes, such as gait issues (scoliosis or leg length discrepancy), osteoarthritis, pregnancy, injury, etc.

How to perform the test (Technique)

To perform this test, first, you must know the position of the patient and the examiner (therapist)

Position of the patient  – The patients stand erect.

Position of the examiner – The examiner (therapist) squats or stands behind the patient. 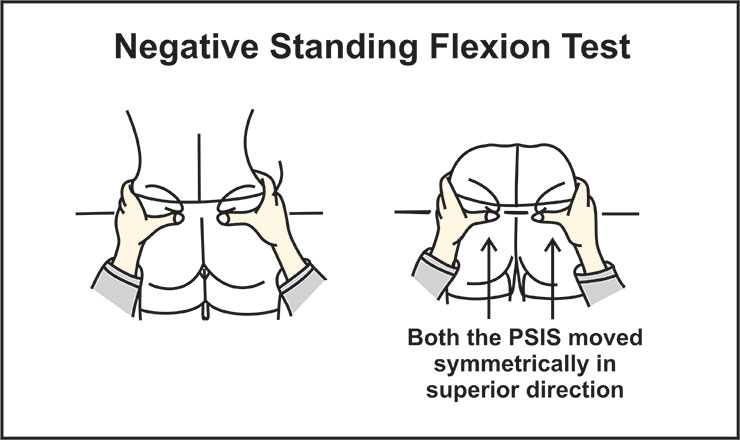 As there will be less nutation, so the sacrum movement will get affected (reduced mobility). Therefore the ilium, including the PSIS on the hypermobile side, will move earlier.

The standing flexion test is used to assess sacroiliac joint dysfunction. But due to lower reliability and validity, the use of this test in clinical practice remains questionable as it has to undergo additional research.

As there are many tests available, the clinical assessment of sacroiliac joint dysfunction is still controversial. Cibulka et al. (1988) investigated the reliability of a combination of four palpation evaluations for its discovery of SIJ dysfunction. The authors conclude that combining and performing the standing flexion test, the supine long sitting test, and palpation of the posterior superior iliac spine heights when sitting, and the prone knee flexion test allows the examiner to detect the existence of SIJ dysfunction.