What is the Springing Test of Thoracic & Lumbar Spine?

Well, it will be better to watch the video first before reading the procedure. So the proper video on how to perform the Springing Test in the  Thoracic or Lumbar Spine is given below.

Well, I hope you enjoyed and understood the procedure by watching the video tutorial. Now let me explain to you the summary of this video.

Procedure For the Lumbar Spine 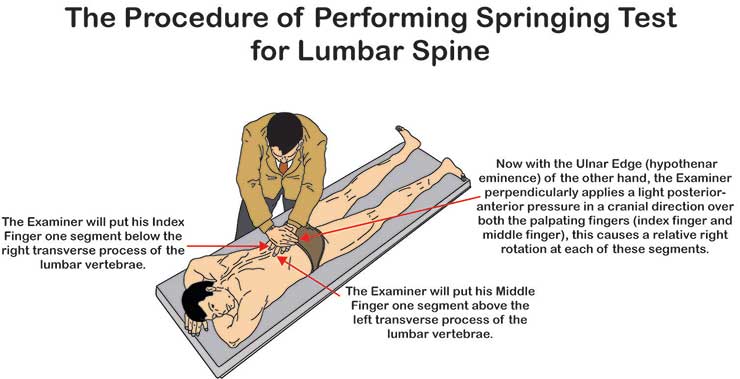 Note – This perpendicular posterior-anterior pressure is known as springing or spring movement. That’s why this test is known as the springing test.

For the Thoracic Spine

When the joint is intact or healthy, the articular process of laminae will be resilient. It indicates negative spring test.

Excessive or lack of resiliency is a sign of abnormal segmental mobility. However, in the former case a blockade and in the latter case hypermobility.

However, the springing Test of the Lumbar Spine is also a provocative test for the posterior longitudinal ligament in particular. And will result in an increase in the deep, dull low back pain that is typical of this structure and is difficult to pinpoint or localize.

What is the Springing Test of Sacroiliac Joint

The procedure of Performing Springing Test of Sacroiliac Joint

Assessment of the Springing Test of Sacroiliac Joint

A normal sacroiliac joint will be Resilient. It means that the palpating pressure will slightly raise the distance between the posterior margin of the ilium and the sacrum. This also indicates a negative spring test.

In a motion restricted sacroiliac joint: This resiliency is not present.

A relatively long range of motion with a hard endpoint indicates hypermobility in the sacroiliac joint.

You May Also Read

Maximum Compression of the Intervertebral Foramina Test of Cervical Spine