What is the Medial Collateral Ligament (MCL)?

MCL is one of the four major ligaments of the knee joint that connects your thigh bone (femur) to your shinbone (tibia). It provides valgus stability (prevents valgus forces) to the knee joint.

Where is MCL located (MCL Location)?

The medial collateral ligament is located on the inner (medial) side of the knee, but it lies outside the knee joint itself. The MCL runs from the femur’s medial epicondyle to the posterior medial surface of the proximal tibia.

MCL originates from the femur’s medial epicondyle and inserts into the posterior medial surface of the proximal tibia. The medial collateral ligament is composed of two portions superficial MCL and deep MCL. Let’s talk about their attachment points (origin and insertion).

The superior MCL has two attachments proximal and distal.

It originates from the medial epicondyle of the femur.

After arising from the medial epicondyle of the femur, it travels inferiorly. It inserts on the posterior medial surface of the proximal tibia i.e., on the metaphyseal region of the tibia, about 5 cm distal (below) to the joint line, lying beneath the pes anserinus bursa. 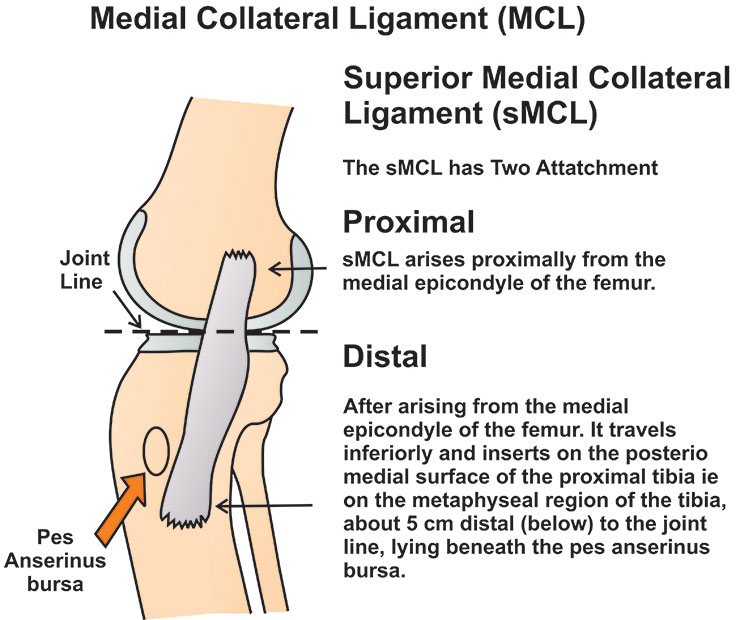 The posterior aspect of the tibial portion of the superficial medial collateral ligament blends with the distal tibial expansion of the semimembranosus tendon.

It originates from the femur distal to the superior medial collateral ligament, and It attaches to the medial meniscus.

It originates from the medial meniscus and attaches to the inferior edge of the medial tibial plateau’s articular cartilage.

The sMCL, especially the proximal partition, resists valgus (abduction) forces through all degrees of knee flexion and knee extension. The distal partition of the sMCL resists lateral (external) rotation forces at the knee joint.

At full knee extension, the knee joint is much better able to resist the valgus force than the position of knee flexion. In knee extension, the medial collateral ligament becomes taught, but as the joint flexion increases, the MCL becomes laxer (loose), and a larger joint space opening is available.

Good and colleagues resolved that.

At near to full extension – MCL contributes 57% of the support against valgus forces.

At 25° of knee flexion – MCL contributes to 78% of the support against the valgus forces.

Why between 20 to 30 degrees of knee flexion MCL provides maximum support against the valgus forces?

It is because when the knee is in full extension knee has the support of other structures (support of joint capsule, ACL, meniscus, etc.), so the MCL need not to work for its maximum.

But when the knee goes into flexion, especially between 20 to 30 degrees, other structures go out of the picture, as they have their own role to play, only MCL is left to prevent these valgus forces.

So if you have injured your ACL and if you are rehabilitating that patient, perform the rehabilitation in such a way that you do not stress your MCL (avoid an excessive amount of valgus force) because, in the absence of ACL, MCL is working in restricting the anterior translation of the tibia.

The Anatomy and Biomechanics of the Anterior Cruciate Ligament

Anatomy and Biomechanics of the Lateral Collateral Ligament

The Anatomy and Biomechanics of the  Posterior Cruciate Ligament