What is Lateral Collateral Ligament (LCL)? Where is the LCL located?

What is Varus stress in the knee?

Varus stress in the knee is the forces coming from medial to lateral side (inside to outside). Therefore, LCL provides support against these varus stresses.

Lateral compartment of the knee

The lateral compartment of the knee plays an essential role in stabilizing the knee joint. Lateral knee structures include a complex arrangement of tendons, ligaments, and muscles. These lateral knee structures act as a primary restraint (provides support) against varus stresses, internal and external rotation, and anterior and posterior translation of the tibia.

The lateral collateral ligament (LCL) originates from the lateral femoral epicondyle. It travels distally (downwards) and finally attaches to the fibula’s head, where it also joins with the biceps femoris tendon to form the conjoined tendon.

The LCL has two attachment points, one on the femur (proximal) and another on the tibia (distal).

The proximal portion of the lateral collateral ligament attaches to the lateral epicondyle of the femur, then it travels distally (downwards). 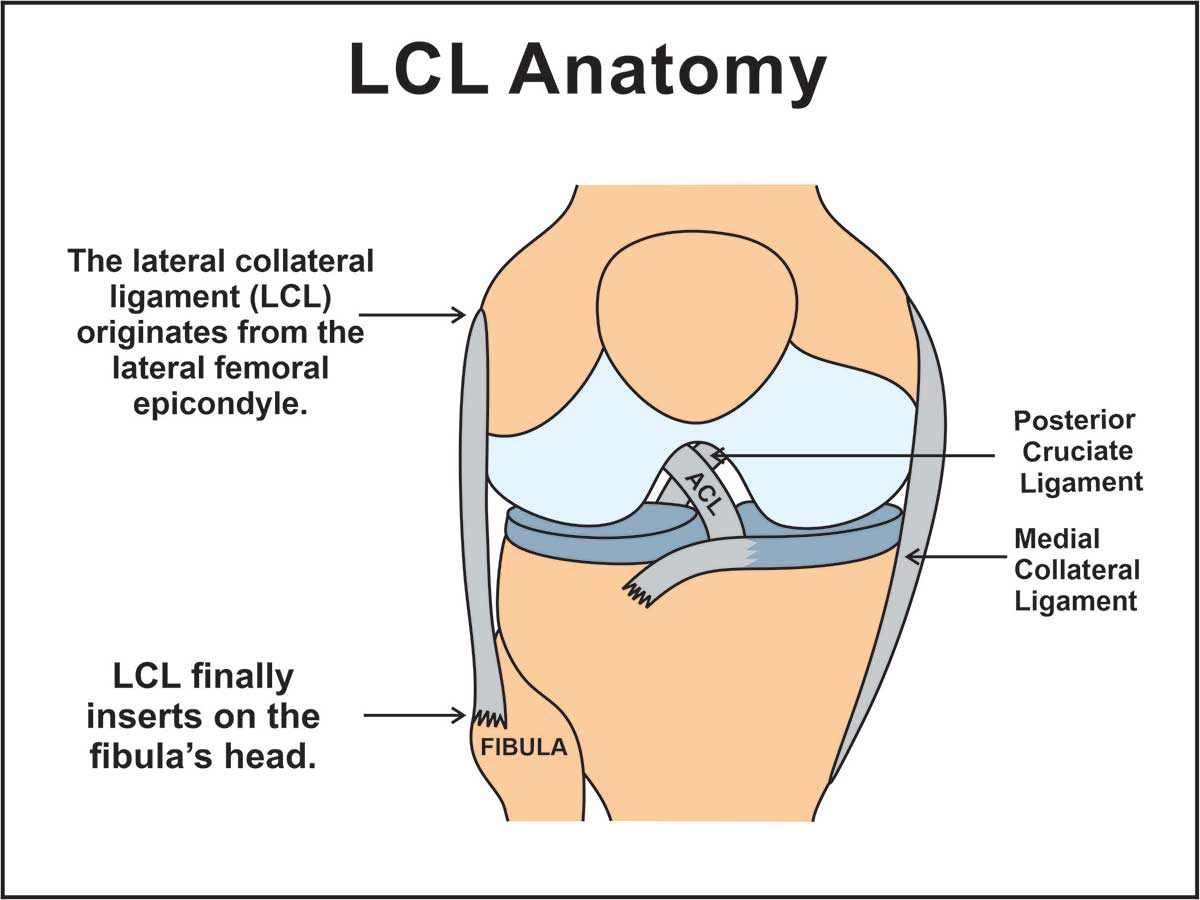 After travelling distally downwards, LCL finally inserts or attaches on the fibula’s head, where it also joins with the biceps femoris tendon to form the conjoined tendon.

Lateral collateral ligament (LCL) prevents the varus stresses (forces coming from medial to lateral side). As a study conducted by Grood and colleagues, they concluded that –

At 5 degrees of knee flexion or near full extension – LCL contributes to 55% of the support against the varus stresses.

At 25° of knee flexion – LCL contributes to 69% of the support against the varus stresses.

Even though the fibular or lateral collateral ligament (LCL) primary function is to prevent or resist the varus stresses, along with that LCL orientation allows the it to avoid excessive lateral rotation of the tibia.

The patient may complain of superficial swelling laterally, he may or may not have trouble weight-bearing, he may suffer instability, where the knee wants to buckle outward.

Position of the Patient – Ask your patient to cross your legs with the ankle resting on the opposite knee (90° knee flexion, hip abduction and external rotation).

In this position, LCL is easier to isolate as the iliotibial band relaxes. The ligament is located posteriorly and laterally along the joint line. There would happen three possible cases after performing the palpation –

If the LCL is intact or uninjured- The examiner will be able to palpate the thin cord-like band structure on the lateral side of the knee joint.

If there is a partial tear – The examiner may feel some amount of tenderness over the LCL.

When there is a Complete tear – The examiner may not be able to palpate the LCL.

A particular test named Varus (adduction) stress test is used to assess the integrity or stability of the LCL.

If the varus stress test is positive at 0° and negative at 30° – It indicates that only LCL is torn.

If the varus stress test is positive at both 0° and 30° – It indicates LCL tear along with the cruciate ligament involvement (ACL OR PCL).