The Apley compression test or Apley grind test is used to evaluate meniscal problems or injuries in the knee. This test was named after Alan Graham Apley (1914-1996), a British orthopedic surgeon who developed this method for assessing patients.

Now let’s understand the anatomy of the meniscus of the knee.

Anatomy of The Meniscus

There are two types of meniscus in each knee joint

The lateral meniscus is more rounded than the Medial meniscus and covers more part of the tibial plateau surface.

The thick peripheral part of the meniscus surface is well supplied with blood and thus gets its nutrients normally by blood. But the inner part is avascular (lacks proper blood supply) and depends upon the synovial fluid for nutrition. Now movements is necessary for the absorption of the nutrients from the synovial fluid as well as nourishment of the middle third of the meniscus.

The cartilage structure of the meniscus acts as a shock absorber or cushion for the knee joint. The meniscus can be torn in several ways. There are several types of potential tears like a degenerative tear, flap tear, radial tear, horizontal tear, bucket handle tear, radial tear.

Functions of the meniscus

For More Details related to the meniscus functions, you can read – Biomechanics of knee joint: Tibiofemoral joint and meniscus.

Performing both tests allows the examiner to get a clearer vision in diagnosing either the meniscus or ligamentous tear as doctors cannot see the internal structures of the human body.

That’s why the doctors perform as many possible physical tests related to the injured area and also order radio imaging techniques like X-ray and MRI to make a more proper diagnosis.

Now Let’s understand the performing procedure of both the tests.

Let’s understand how it is performed.

The starting procedure of this test remains the same as of the Apley compression test. 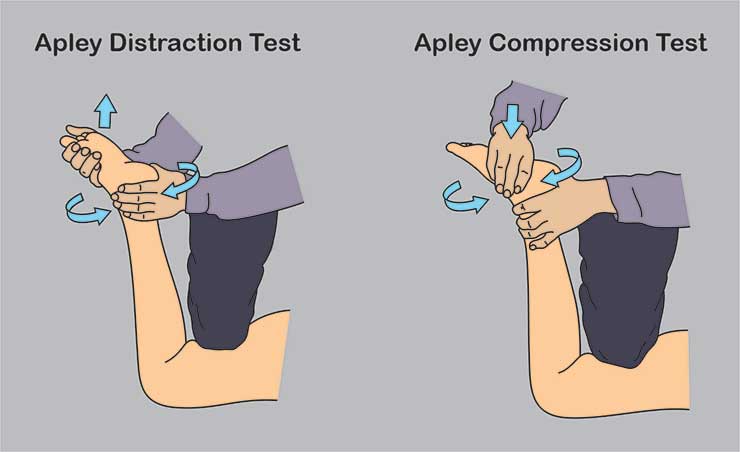 Now let us discuss some questions.

This is because, on compression, the meniscus gets grinded between the two bones (femur & tibia). Thus rotation in that scenario produced much pain sensation. However, while during distraction, there is no pressure on the meniscus, thus painless rotation movement is present.

What happens when there is a ligamentous injury in one leg (Positive Apley distraction test)?

This shows that the leg which is allowing excessive rotation probably has a ligamentous injury. This can be inferred that the ligaments are responsible for restricting the excess rotation, which is missing here.

You may Also Read