What is ACL? Where is the ACL located?

The word cruciate means ‘cross’; here, the term ‘cross’ signifies that a cruciate ligament forms an ‘X’ shape which means one ligament (ACL) crosses over another ligament(PCL).

ACL is located in the center of the knee. It is also known as the central ligament of the knee. ACL’s primary function is to prevent the anterior tibial translation and internal(medial) rotation.

Biomechanics and Anatomy of the ACL

As many readers appreciated biomechanical information. And also, it has positively influenced clinical practice. There is a lot to study in biomechanics like biomechanics of knee joint, shoulder joint, elbow joint, ligaments, and many more, and now you are reading the ACL biomechanics.

You may also read – Biomechanics of the knee joint.

Biomechanics is a study of human motion, which tells how bones, muscle, tendon, and ligament work together to generate motion. Biomechanics mainly focuses on the mechanics of the movement, Well talking about the knee, the knee is the main complex joint. Ligaments like the anterior cruciate ligament essentially control its equilibrium and motion.

ACL acts as the primary restraint for the anterior translation of the tibia on the femur and internal rotation. There is a lot of words to express the same sentence. You can either say

2 – To provide support or stability against the anterior tibia translation & internal rotation.

Due to the increased amount of injury rates among active individuals and athletes. It has caused a considerable amount of research linked to the anterior cruciate ligament’s structure and function.

The most common and frequent injury mechanism is non-contact combined valgus and internal rotation injury. It is seen that ACL injuries are often associated with other ligamentous injuries like partial rupture of MCL or menisci. Also, these valgus forces can lead to compression of lateral condyle along with bone bruise.

ACL originates from the posterio-medial side of the lateral femoral condyle. Then it travels inferiorly, medially, and anteriorly and finally inserts distally to the tibia on the lateral and anterior aspect of the medial intercondylar tibial spine.

The ACL has two attachment points, one on the femur (proximal) and the other on the tibia (distal).

It originates from the posterio-medial side of the lateral femoral condyle, and then it travels inferiorly, medially, and anteriorly.

It finally attaches distally to the tibia on the lateral and anterior aspects of the medial intercondylar tibial spine.

ACL structure is made up of two functional bands, the Anteromedial band (AMB) and posterolateral band (PLB). The functions of both these bands are different from each other. The AMB lies in the front (anteriorly), and PLB lies just posterior to the AMB.

The ACL is attached to the femur and tibia as a group of individual fascicles, not as a singular cord. All these fascicles have been divided into two groups – the anteromedial band (AMB) and the posterolateral band (PLB).

Anteromedial band (AMB) – These fascicles originates at the femoral attachment’s proximal part and inserts at the anteromedial part of the tibial attachment.

Posterolateral band (PLB) – These are the remaining bulk of fascicles, which inserts at the posterolateral part of the tibial attachment.

The primary function of the ACL is to prevent the anterior translation of the tibia. Depending upon the knee flexion angle, this function is, however, attributed to either the anteromedial bundle or the posterolateral bundle,

In knee extension – When the knee is extended, the PLB is taut, while the AMB is slack (loosen).

In knee flexion – As the knee flexion increases, the AMB, which is slack (loosen) in extension, will start to tighten (to prevent the anterior tibial load) and PLB to loosen. 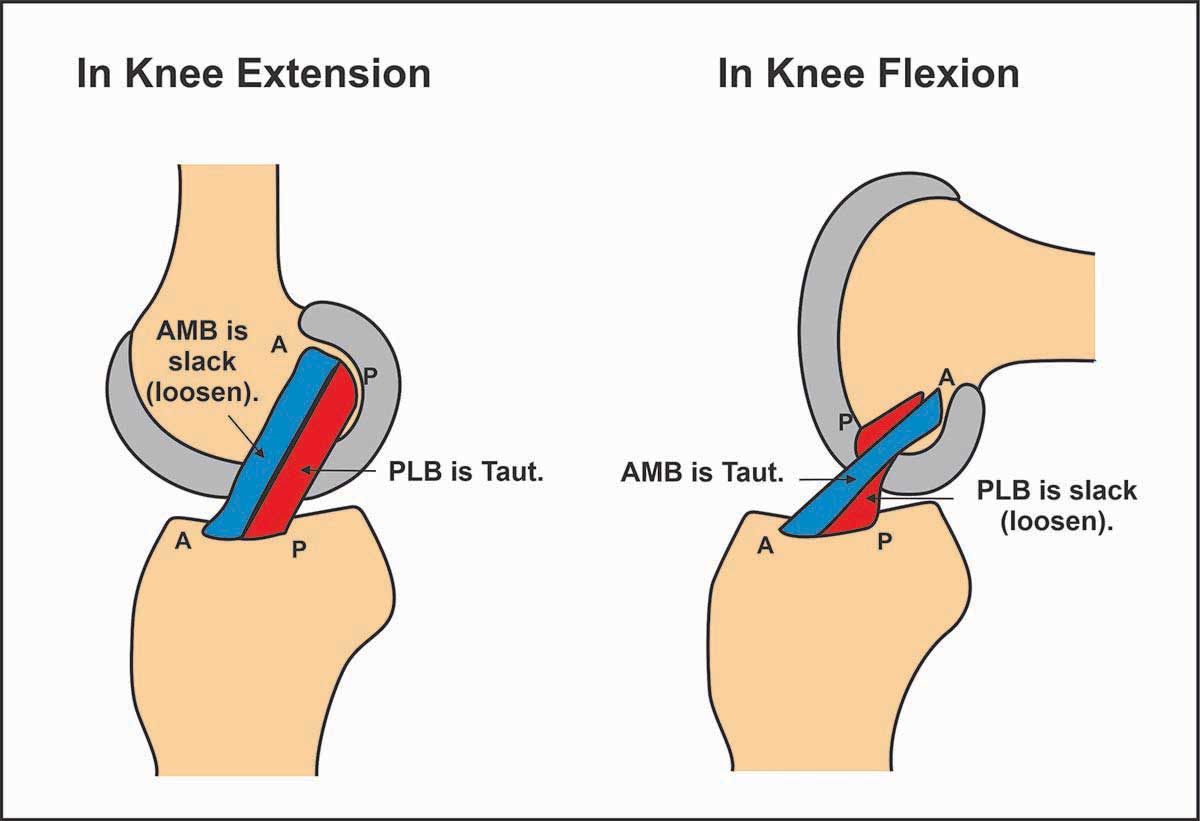 During extension, why the knee joint is having the least amount of Anterior tibial translation?

During extension, the Posterior lateral band (PLB) is very strong, and at the same time, other passive structures of the knee also provide support. That’s why in full extension, no anterior tibial translation is possible. Due to this reason, ACL also prevents hyperextension of the knee.

Why, at 30 degrees of flexion, maximum Anterior tibial translation is possible?

Lets talk about ACL secondary function, In addition to the primary function of preventing anterior tibial translation. Anterior cruciate ligament secondary function is to provide rotational stability to the knee during varus/valgus angulation, medial/lateral rotation and sometimes combination of both.

How ACL is interdependent on MCL

The primary function of MCL is to prevent valgus forces through all degrees of knee flexion and extension. And MCL’s secondary role is to prevent anterior tibial translation of tibia in the non-appearance of ACL.

You may also Read – Biomechanics of Medial Collateral Ligament.

Some more facts of the ACL

How muscles around the ACL going to affect your ACL

The muscle which are most commonly involved are Quadriceps, Hamstrings, gastrocnemius, and soleus. These are some chief muscles that remain active throughout your gait cycle. These muscles will either induce or reduce the strain on the anterior cruciate ligament (ACL).

The concept behind inducing or reducing strain on the ACL

The muscles which are capable of producing extension in the knee will produce a bit of anterior translation of the tibia. This anterior tibial translation will increase the strain on the ACL.

The muscles capable of producing flexion in the knee will produce a slighter posterior translation of the tibia. and this posterior tibia translation is going to minimize the strain on the ACL.

Muscles which are going to increase the strain on the ACL

The answer to this question is quite simple. The gastrocnemius muscle proximal tendon wraps around the posterior tibia, so when the muscle is actively contracting or stretched, it effectively pushes the tibia forward (anterior tibial translation).

Muscles that are going to minimize the strain on the ACL

Soleus Muscle is also capable of producing a posterior translation of the tibia. As it does not wraps around the tibia, so it will only produce a posterior tibial translation and hence helps minimize the strain on the ACL.

In conclusion, Quadriceps and gastrocnemius produce an anterior tibial translation. Thus, increases the load on the ACL.

Hamstrings and Soleus produce a posterior tibial translation, hence minimizes or relieves the load on the ACL.

As individuals, muscles have the ability to either increases or decrease the load or stress on the ACL. Therefore, the co-contraction of the multiple muscles around the knee can affect the strain on the ACL. Let me explain this by example.

Contraction good for you

Contraction bad for you

Suppose there is a co-contraction of the Quadriceps and gastrocnemius together. In that case, it will impose a more significant load on the ACL as both the muscles produce an anterior tibial translation.

Conclusion – As explained above, muscular co-contraction can decrease the strain on the ligament(ACL), but it all comes at a price. Co-contraction produces a greater amount of muscular force, and these muscular forces start compressing your knee joint.

The Anatomy and Biomechanics of the Posterior Cruciate Ligament

Anatomy and Biomechanics of the Lateral Collateral Ligament

The Anatomy and Biomechanics of the Medial Collateral Ligament